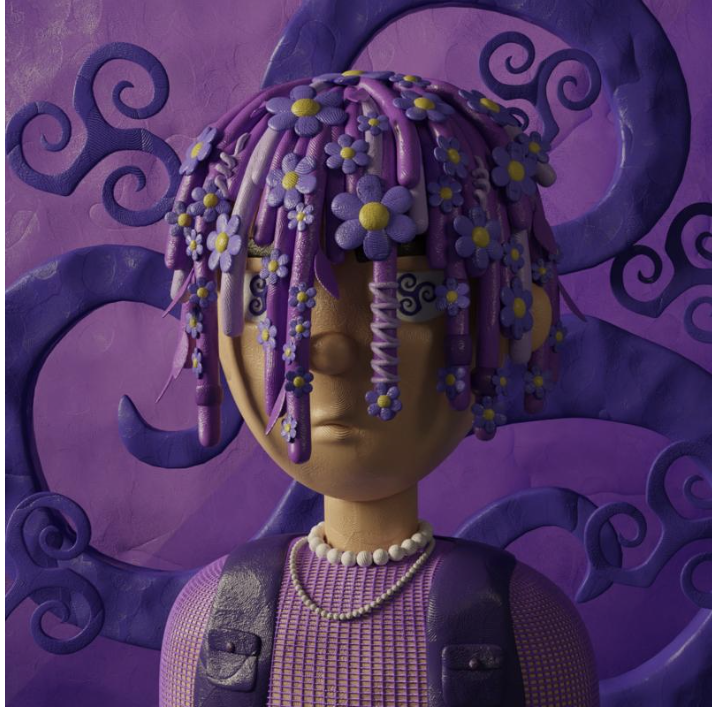 [NFT asset by KIDondrej]
May 31, 2022 – OneOf, the go-to Web3 platform for music, sports and lifestyle has announced the iann dior: 1212 Collection, 3D-claymation generative drop created by @kidondrej. This is dior’s first NFT collection, and it will go live today, Tuesday, May 31 via OneOf.
The NFT collection is an iann dior exclusive fan member club experience that lists all the utilities the fans have get alongside their custom NFT. The launch is the lead-up to the release of the multi-platinum star’s new single “Live Fast Die Dumb.” Also, dior is set to hit the road with Machine Gun Kelly on his arena tour this summer.
Recently featured on Forbes’ 30 Under 30 list and as the face of MCM’s 2022 Spring/Summer Collection, Puerto Rican-born Corpus Christi-raised dior has amassed 3.7 billion streams in just three short years and is one of the music industry’s fastest rising stars. Most recently he released his album “on to better things” which included the Top 40 hit, “let you” and features from Lil Uzi Vert, Machine Gun Kelly and Travis Barker.
A highly versatile talent, dior has released songs with big-name acts such as Lil Baby, Machine Gun Kelly, Travis Barker, Clean Bandit, and Trippie Redd, and his work has been charted in multiple genres including Alternative, Pop, Rap, and Electronic/Dance.
Finding it challenging to match a creative vision to his unique style and vibe, dior decided to look to his own community for a collaborator, and found KIDondrej through Instagram and the fan art that was created for dior for an earlier album release. The 1212 Collection will consist of 1212 unique NFTs at different rarity levels based on the individual characteristics of each NFT. Holders will have access to exclusive merchandise signed by dior, a physical poster of the NFT signed by dior, exclusive presale access to new merch, tickets to concerts and/or events, activations including meet and greets, a studio session and more.
As always, this collection on OneOf will be available to fans via fiat currency, credit/debit cards as well as prepaid cryptocurrency.
Go here for more information and to sign up.
“I really love staying connected to my fans, so putting together this exclusive collection of NFTs has been amazing,” says dior about OneOf’s 1212 Collection.  “Discovering KIDondrej’s art was incredible and I can’t wait to continue our creative relationship with my first NFT collection on OneOf.”
“OneOf was built to make it as simple and environmentally friendly as possible for artists to launch NFTs and enter the Web3 space, and it’s an honor to have iann, a remarkable young talent with such a distinct artistic vision and style, drop his very first collection with OneOf to connect with his fans across the globe in a new way,” says Thomas Fiss, Vice President of Music NFTs. “We also think it’s amazing that he found the NFT designer, KIDondrej, within his own fan community – and we think his fans will love this generative collection and utilities and experiences that can be unlocked.”
Using up to two million times less energy to mint an NFT than other networks, OneOf is the leading platform paving the way towards a more fan-friendly, inclusive and environmentally sustainable web3 future. Users can purchase their NFTs with credit/debit cards as well as many top cryptocurrencies including BTC, ETH, Tezos, Matic, and USDC, while OneOf offers partners the option to donate portions of their NFT proceeds to charities of their choice.
OneOf has launched the debut NFT collections from artists such as G-Eazy, Cordae, Doja Cat and Masego. The company has also formed partnerships with The Recording Academy, Warner Music Group, The Breakfast Club, Sports Illustrated, iHeartRadio Music Festival, The Whitney Houston Estate, and The Christopher Wallace Estate, for the upcoming Notorious B.I.G. NFT collection. Most recently, OneOf revealed CO//SIGN, a new program reimagining the fan club and empowering music’s next generation of breakout stars. Providing artists like Amindi, Rakeem Miles and mazie with creative, financial, and marketing support, CO//SIGN uses NFTs and Web3 technology to facilitate a new economic link between the musician and fan. Learn more about the program and first artists featured HERE. 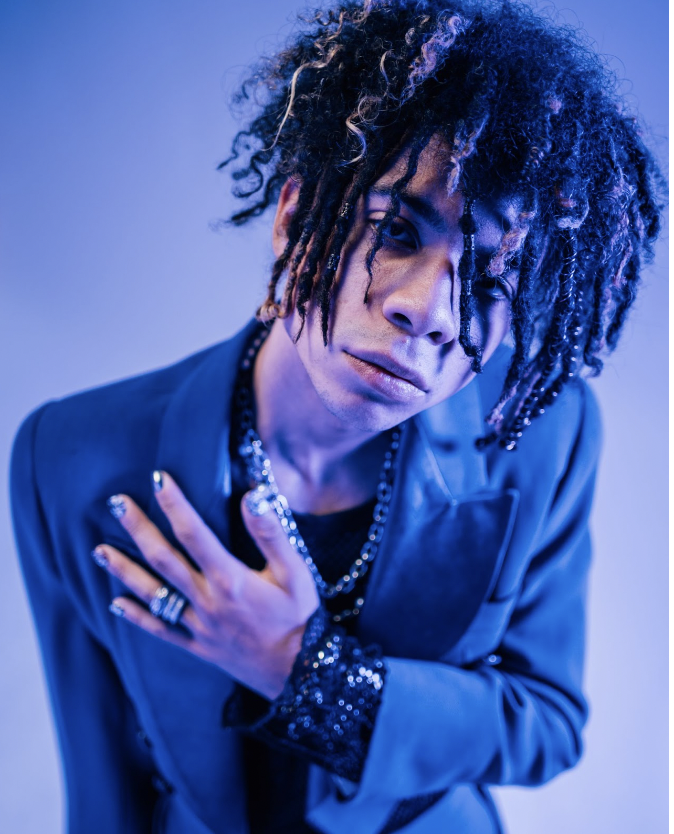 ABOUT iann dior
Multi-platinum selling, chart topping, iann dior has become one of the industry’s fastest rising new artists. Puerto Rican-born, Corpus Christi-raised Michael Iann Olmo (also known as “iann dior”) found success with the first song he ever wrote. After uploading to SoundCloud, the song gained 10,000 plays in its first week and caught the ear of Internet Money founder Taz Taylor who invited the budding songwriter to work with him in LA. Shortly afterwards, iann dior inked a deal with Elliot Grainge’s label 10K Projects in April 2019 and released his project Industry Plant.
2020 was a breakout year for the burgeoning star with his feature on the Billboard Hot 100 #1 hit “Mood” with 24KGoldn, which is now certified 4x platinum and charted inside the Top 10 for 10 weeks. The duo performed the track on the The Voice, American Music Awards, Jimmy Kimmel Live! and were nominated for 2 VMAS, 3 Billboard Music Awards, 1 AMA and 1 iHeartRadio Music Award for their success with “Mood.” iann has released songs with acts like Lil Baby, Machine Gun Kelly, Travis Barker, Clean Bandit, Trippie Redd and more. Known as a highly versatile talent, his work has charted in Alternative, Pop, Rap and Electronic/Dance genres and has earned him the #1 spot on Billboard’s Emerging Artists chart. iann dior assures his fans this is only the beginning. “A number one album is up next… I want to become the number one artist in the world, and I am fully determined and obsessed with being the greatest.”
dior most recently released his latest album on to better things in January, which has amassed over 180+ million streams and received acclaim from NPR, Rolling Stone, Pitchfork, and NME, who hailed the album a “a bigger, more confident statement, and a perfect ode to the evolution of pop-punk.” The album’s first single “v12” ft. Lil Uzi Vert was released to critical acclaim by the likes of The New York Times, Complex, V Magazine, VIBE and many more. The track was immediately playlisted on Spotify’s New Music Friday and Rap Caviar amongst others and first premiered on Zane Lowe’s Apple Music 1 show. Following up, he shared the guitar forward single “let you,” which was featured in German luxury fashion house MCM’s latest SS22 collection that saw dior star as the face of the campaign.
Adding to his incredible accolades, dior was named to the coveted Forbes ‘30 Under 30’ list in 2021. In total dior has amassed over 3.7 billion streams worldwide and is set to embark on tour with Machine Gun Kelly this summer.

ABOUT ONDREJ
KIDondrej is a 21-year-old visual artist from the Czech Republic who fell in love with art at a very young age. He is known to push new innovative styles and longs to be free to create things in his own unique way. After attending art school, rather than following the path of his peers, KIDondrej blazed his own trail by designing a clothing brand that gave him the freedom to create and fine-tune his own unique style. KIDondrej began with simple 2D art but quickly decided that wasn’t enough and taught himself how to work in 3D. Drawing inspiration from the likes of Cole Bennett, Yung Lean, Iann Dior, Kid Cudi, and more, KIDondrej began experimenting in the music space by starting out with album cover artwork and growing to what we see today—a unique style of 3D digital art in the form of “claymation” that is showcased on his Instagram page—@kidondrej.

ABOUT ONEOF
Deeply committed to a sustainable blockchain future, OneOf is an NFT platform that supports NFTs on multiple energy-efficient blockchains, to create sustainable, creator-and-fan-friendly experiences. Minting an NFT on OneOf's platform uses up to over 2 million times less energy than proof-of-work networks, and for its users, purchasing NFTs costs $0 in blockchain gas fees. OneOf aims to bring the next 100 million non-crypto-native fans into Web3 by removing the technical frictions and allowing fans to pay for their NFTs with credit/debit cards as well as major cryptocurrencies. Committed to diversity, over 80% of the collections featured on OneOf come from minority or female creators. In addition, OneOf donates portions of proceeds from every NFT collection to its artist or athlete partner's preferred charity.